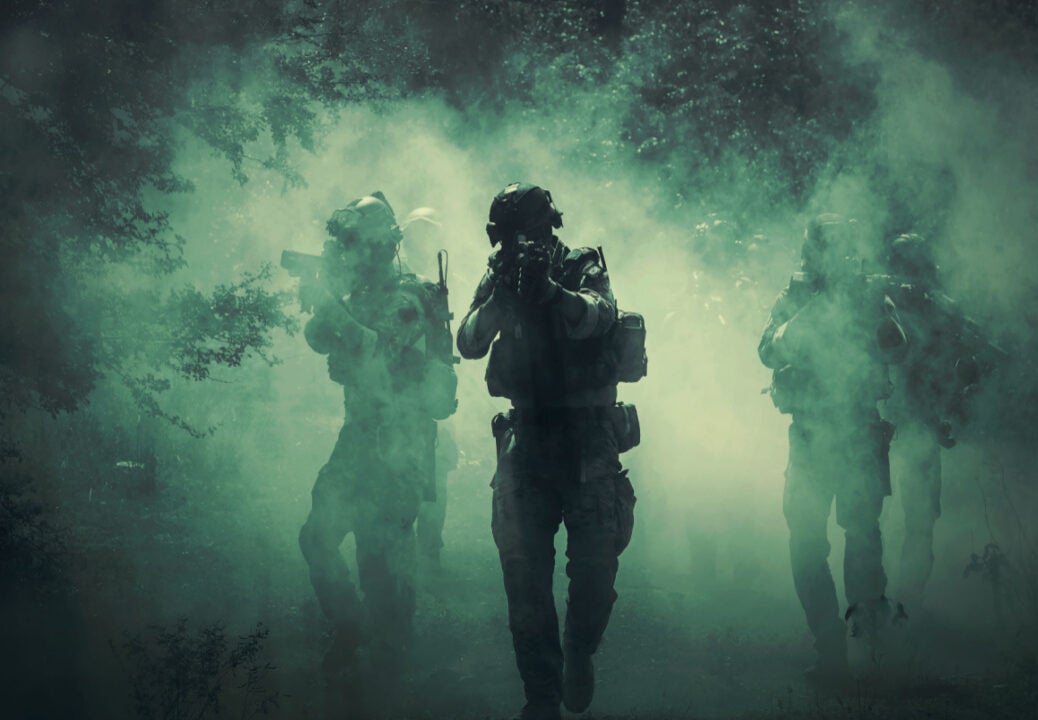 Army Technology lists the top five terms tweeted on military and security in Q1 2022, based on data from GlobalData’s Aerospace, Defence, and Security (ADS) Influencer Platform.

The top trends are the most mentioned terms or concepts among Twitter discussions of more than 228 military and security experts tracked by GlobalData’s ADS Influencer platform during the first quarter (Q1) of 2022.

The US administration considering deploying several thousand of US troops, warships and aircraft, in Eastern Europe, Syrian military recruiting troops to fight for Russia, and muddy terrain and robust Ukrainian military prowess posing challenges for Russian invasion, were some of the popularly discussed topics in Q1 2022.

Ivo Daalder, president of the Chicago Council on Global Affairs, a non-partisan think tank, tweeted on the US administration finally contemplating to deploy troops, warships, and aircraft to its North Atlantic Treaty Organization (NATO) allies in the Baltics and Eastern Europe as President Putin stood ready to invade Ukraine with more than 100,000 troops. The US therefore seemed to finally move away from its do-not-provoke strategy to an aggressive one against Russia. As a result, several senior Pentagon officials met at Camp David, the presidential retreat in Maryland, to discuss options to move the country’s military troops closer to Putin, the article detailed.

The options included dispatching almost 1,000 to 5,000 troops to Eastern European, with plans to increase the number tenfold if the situation deteriorated. However, none of the options included deploying US troops in Ukraine, as President Biden expressed his dislike for conflict and pulling out its troops from Afghanistan last summer after 20 years, the article highlighted.

The term was also discussed in an article shared by Anne Applebaum, a journalist and senior fellow  at the Johns Hopkins School of Advanced International Studies and the Agora Institute, on Russian diplomats threatening to move troops to Cuba and Venezuela, as the Russian state media having scorned international negotiations as a charade. Applebaum believes that all this was happening because Putin was threatened by a free and wealthy Ukraine. This meant that Ukraine posed an ideological threat to his oppressive and kleptocratic  regime, and therefore, he was trying to destabilise it. As a result, Russian troops not only occupied parts of Ukraine now, but also Moldova and Georgia, she added.

In another tweet, Malcolm Nance, a counterterrorism specialist, discussed the invasion routes into Ukraine. After spending a month in Ukraine trying to map out the escape routes in case of an invasion, and having spent 35 years with the US Navy intelligences, Nance believed that there were possibilities of Russia taking control of an eastern region in a week’s time. However, the muddy terrain and robust Ukrainian troops and weaponry would pose a huge challenge for Russia to take control, he added.

Australia buying M1A2 SEPv3 advanced Abrams tanks in a $2.5m deal, and Russian warships spotted entering the Mediterranean Sea carrying 60 tanks and 1,500 soldiers, were some of the popular discussions in the first quarter of 2022.

Tyler Rogoway, an aviation and military expert, shared an article on Australia looking to modernise its land warfare capabilities by signing a $2.5m deal to purchase 75 M1A2 SEPv3 advanced Abrams tanks, along with armoured support vehicles. Among other spending plans, the Australian Defence Force (ADF) is looking to bring on board nuclear-powered attack submarines, advanced air combat drones, and hypersonic weapons, the article noted.

The tanks have been purchased under the Main Battle Tank Upgrade, also called LAND 907 Phase 2, while the combat engineering vehicle (LAND 8160 Phase 1) is expected to deliver 29 M1150 assault breacher vehicles, 17 M1074 joint assault bridge vehicles, and six M88A2 armoured recovery vehicles, which is an addition to the already existing 13 in service. The article further detailed the US government approved the sale of the new vehicles to Australia through a Foreign Military Sales channels in April 2021. Developed by the US Army, the M1A2 SEPv3 is considered to be the best variant among the Abrams currently available, but its future value is questionable, the article highlighted.

The term also trended in an article shared by Shashank Joshi, a defence editor, on Russia’s naval build-up continuing, with Spanish navy having spotted six Russian warships from its Northern Fleet entering the Mediterranean Sea and headed towards the Black Sea. The Spanish Navy Meteoro class offshore patrol vessel spotted the Russian vessels when it was entering the Central Mediterranean through the Strait of Gibraltar, the article noted.

According to Italian media reports, the Russian vessels were carrying 60 tanks and more than 1,500 soldiers aboard the warships. While the warships initially navigated in the Sicilian Channel, Ukraine’s former defence minister, Andriy Zagorodnyuk, cautioned about a possible Russian invasion, the article detailed.

An elite Ukrainian drone unit destroying Russian armour as they sleep, the Russian convoy of armoured vehicles and supply trucks to Kyiv struck by 30 Ukrainian special forces and drone operators on quad bikes, and US approving allied weapons delivery like anti-armour and ground-to-air missiles to Ukraine, were some of the popular discussions in Q1.

Michael Weiss, a journalist, tweeted on the R18 model that has a 4km range, 40-minute flight time and capacity to drop 5kg bombs to have destroyed Russian armour as they slept. The article further detailed that the specialist Ukrainian drone unit destroyed dozens of priority targets when the Russian forces were asleep. Called the Aerorozvidka, an elite air reconnaissance unit of the army, destroyed tanks, vehicles carrying eletrconic equipment, and command since the beginning of the invasion, the article noted. Equipped with 50 squads of drone pilot experts, the Aerorozvidka’s primary targets were the immobile Russian convoys.

The term also trended in an article shared by Peter W Singer, an author and senior fellow at New America, on how 30 Ukrainian specialist forces and drone operators on squad bikes destroyed the Russian armoured convoy advancing towards Kyiv. A Ukrainian commander stated that a Russia carried out a 40-mile mechanised column to attach Kyiv from the North. However, the convoy of armoured trucks and supply trucks were destroyed by a team of 30 special forces and drones, the article highlighted.

In another tweet, Dave Brown, a defence editor, shared an article on the US government approving allied weapons delivery to Ukraine as worries increased over Russia’s invasion. The State Department, as a result, gave a go-ahead to three NATO allies, namely Estonia, Latvia, and Lithuania, to dispatch US-made lethal weapons, such as anti-armour and ground-to-air missiles, the article highlighted. The Biden administration also sought to process the delivery of $200m-worth ammunition, anti-armour missiles, and other equipment to Ukraine in the days ahead.

The Ukrainian army however, held its ground with the help of sophisticated weapons, such as the Javelin anti-armour missiles, and with the Stinger ground-to-air missiles on its wish list. Meanwhile, some countries had already started dispatching their own weapons to Ukraine due to growing tensions on the border, the article noted.

The Russian Military of Defence having initiated a programme to develop attack UAVs or shock drones, and 100 unmanned aerial systems forming a part of the $1bn security assistance provided by the US to Ukraine, were some of the trending discussions in Q1.

Samuel Bendett, a researcher at the CNA Corporation, a non-profit research and analysis organisation, tweeted on the Russian Military of Defence developing a programme for building attack UAVs, which focused on heavy attack drones, light UAVs, as well as helicopter UAVs that would be integrated into the Russian Armed Forces. The programme is designed for a period of five years, where key UAVs will be integrated into the Russian army, including the Pacer, Altius, Hunter, and others.

The article further noted that Russia’s first batch of Pacers, earlier known as Orion entered the troops last year. Meanwhile, the industry and the Ministry of Defense showcased several models in 2021 that are almost ready to enter service. They will be part of the new programme, the article highlighted.

The term also trended in an article shared by Michael Weiss, on 100 tactical unmanned aerial systems being included in the new $800m assistance package being provided by the US to Ukraine. This brought the total US security assistance to Ukraine to $1bn in a week, and to $2bn since the start of the Biden administration, the statements revealed. As part of the agreement, the US would directly transfer equipment from the Department of Defence (DoD) to the Ukrainian military to defend their country against the Russian invasion, the article detailed.

Arda Mevlutoglu, an aviation and defence policies expert, shared an article on the need for ATGMs by the Ukrainian army to fight the Russian tanks and armoured vehicles. Military experts believed that the Ukrainian troops are bound to be outgunned as they lacked new ATGMs and radars, the article highlighted. The Ukrainian government had already requested the US for hi-tech radar that detected heavy weapons and Javelin anti-tank missiles, experts stated. Meanwhile, the US government was still speculating whether to supply Ukraine with defensive weapons directly, the article noted.

The term also trended in an article shared by Tyler Rogoway, on a UK airbridge operation that supplied Next Generation Light Anti-tank Weapons (NLAWs) to Ukraine. UK’s Royal Air Force C-17 cargo planes were observed around the Boryspil International Airport outside Kyiv, the Ukrainian capital, indicating that the UK were taking a route that avoided German airspace, after authorities announced that they had planned the arms deliveries. The move by the UK was made amid rising concerns over Russia’s large-scale military attack on Ukraine, the article detailed.

The RAF C-17 flights to Ukraine flew over the North Sea, then east across Denmark and into the Baltic Sea. Then from there the jets turned southeast and flew through Poland to Ukraine, the article noted. The aircraft flew back via the same route to the UK in a reverse pattern and it was still unknown why it skirted the German airspace although both the countries denied that it was not the case.

In another tweet, Sam Bendett shared an article on the Ukraine army planning to conduct drills with drones and anti-tank missiles in response to Russia’s military presence in Belarus, northern Ukraine. The Ukrainian defence minister, Oleksii Reznikov, further added that Ukrainian soldiers would be training with Bayraktar drones and anti-tank Javelin and NLAW missiles provided by overseas partners.

Although Russia denied all plans to invade Ukraine, stating that it was only bolstering its defence amid NATO expansion in the east, western countries remained worried about its military advancement in Belarus and the Ukrainian border.