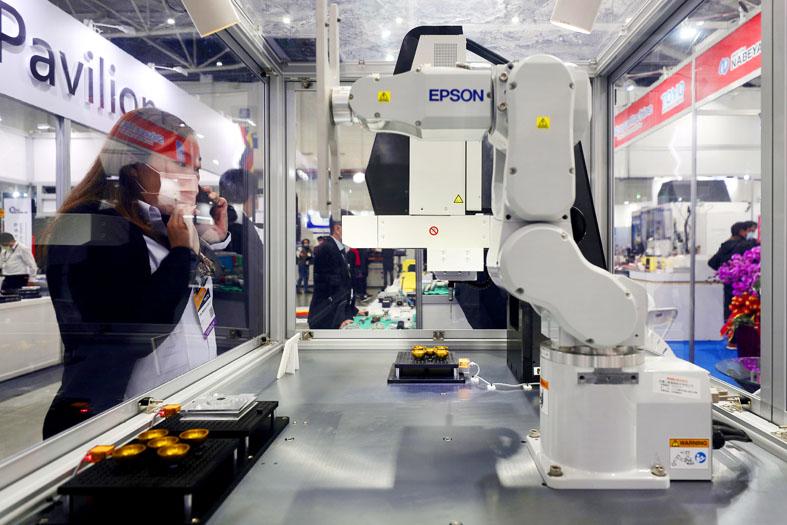 CAPITAL BOOST: Export-oriented manufacturers can expect output to trend higher, as global demand and private investment are on the rise, a research institute said

The production value of the local manufacturing sector is expected to rise 6.4 percent from a year earlier to hit a record NT$25.8 trillion (US$872.09 billion) this year as Taiwanese tech exporters continue to benefit from healthy global demand and significant investment, the Industrial Technology Research Institute said.

However, for many export-oriented manufacturers, output is expected to continue trending higher, with the local economy to grow steadily amid healthy global demand and an increase in private investment, Chen said.

The four major industries in the manufacturing sector are forecast to see an increase in their output, based on the institute’s model, Chen said.

The information and electronics industry is expected to generate NT$10.32 trillion in production value this year, up 9.28 percent from a year earlier, benefiting from robust shipments in gadgets used in emerging technologies such as 5G applications, artificial intelligence of things (AIoT), high-performance computing devices and automotive electronics, Chen said.

This growth is likely to lead to higher demand for semiconductors and other electronic components, she added.

The production value of the metal and mechatronics industry is expected to rise 6.08 percent from a year earlier to NT$7.37 trillion given the rising popularity of production automation, smart manufacturing and renewable energy development, Chen said.

The output of light industries, such as textile supplies, is expected to rise 2.64 percent from a year earlier to NT$2.76 trillion as many clients of Taiwanese textile producers are to resume efforts to rebuild inventories, she said.

The chemical industry is expected to post NT$5.35 trillion in production value, up 1.92 percent from a year earlier, as the industry faced a relatively high comparison base last year and international crude oil prices are to remain high before moderating from the third quarter, Chen said.

The local manufacturing sector should remain alert for risks from geopolitical tensions and the COVID-19 pandemic, she said.

The institute also forecast that Taiwan’s renewable energy industry would generate about NT$209.5 billion in production value this year, up 5.7 percent from a year earlier, which would be the first time in five years that the industry’s output exceeds NT$200 billion.

Comments will be moderated. Keep comments relevant to the article. Remarks containing abusive and obscene language, personal attacks of any kind or promotion will be removed and the user banned. Final decision will be at the discretion of the Taipei Times.